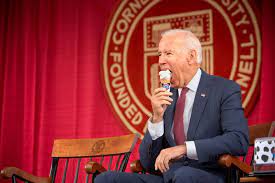 President Biden and his accountant are facing new IRS whistleblower complaints alleging that Biden owes at least $127,000 in back taxes, according to a new report published in the New York Post.

The complaints were filed by Chris Jacobs, a former Republican aide on Capitol Hill, to coincide with Monday’s federal tax filing deadline.

“Federal agencies must implement laws on a non-partisan basis,” Jacobs told The Post. “The fact that the IRS did not audit Joe Biden’s 2017 through 2019 returns, despite several articles publicly raising questions about the propriety of his actions, raises questions about how the IRS administers our nation’s tax laws, and whether political considerations played a role in the IRS’ decisions.”

Biden and his wife, Jill, avoided paying Medicare taxes on book income and speaking fees in 2017 and 2018 by routing $13.3 million through “S corporations” and counting a small amount as eligible for the federal health care tax.

The strategy is commonly used by wealthy people to dodge the 3.8% Medicare levy on large amounts of income and experts say the IRS lacks the resources to aggressively pursue cases of underpayment.

Republicans are vowing to investigate Biden’s tax situation next year if they retake Congress and regularly accuse him of hypocrisy for urging the wealthy to pay their “fair share.” Biden last year proposed legislation to close the tax loophole and boost IRS enforcement.

Democrats say Biden used a common tax strategy and that there’s no directly analogous case that indicates he was wrong in his calculations.

The IRS offers whistleblowers rewards of between 15% and 30% of what it recovers, but Jacobs wrote in his complaint that he “would gladly forego [sic] any potential remuneration.”

The controversy concerns what legally counts as “reasonable compensation,” a term that determines the share of S corporation income subject to the Medicare tax. Critics argue that Biden’s own labor was responsible for almost all of his speaking fees and book revenue. Therefore, a very large share of the S corporation revenue should face the Medicare tax.

“The facts do not suggest that Mr. Biden arrived at anything approaching a level of ‘reasonable compensation’ consistent with IRS guidelines. Instead, Mr. Biden’s salary level appears to have been set arbitrarily at a level just slightly above the Social Security wage base, with other factors — Mr. Biden’s own salary history, the compensation received by comparable individuals and comparable filers, and the labor vs. capital allocation — all but ignored,” Jacobs wrote.