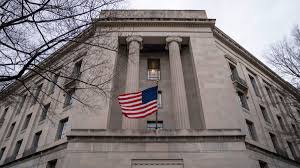 he Department of Justice (DOJ) has uncovered a vast array of alleged fraudulent and criminal activities tied to more than $8 billion in federal COVID-19 aid, the agency announced Thursday.

In response, the agency said it was immediately appointing a new director tasked specifically with coronavirus fraud enforcement.

Kevin Chambers, who joined the agency as an associate deputy attorney general, “plans to focus on large-scale criminal enterprises and foreign actors who sought to profit at the expense of the American people,” the DOJ said.ADVERTISEMENT

The move follows President Biden‘s State of the Union pledge to go after “the criminals who stole billions in relief money meant for small businesses and millions of Americans.”

The DOJ said Chambers’s top priority will be to establish strike force teams, which the White House said will “use state-of-the-art data analytics tools to connect the dots on identity theft and other complex fraud schemes committed across state lines or transnationally.”

During the past two years, Congress has poured nearly $6 trillion of taxpayer funds into the economy in an effort to bolster families and businesses, particularly in the health care sector. That massive influx of cash has been a prime target for fraud.

Some cases involve obtaining loans for nonexistent companies and using the money for sports cars, jewelry, home improvements and even a Pokemon card, in one instance.

To date, the agency has charged more than 1,000 defendants with alleged losses exceeding $1.1 billion, seized more than $1 billion and launched civil investigations into more than 1,800 individuals and entities for alleged fraud in connection with more than $6 billion in loans.

“The Justice Department remains committed to using every available federal tool — including criminal, civil, and administrative actions — to combat and prevent COVID-19 related fraud,” Attorney General Merrick Garland said in a statement. “We will continue to hold accountable those who seek to exploit the pandemic for personal gain, to protect vulnerable populations, and to safeguard the integrity of taxpayer-funded programs.”