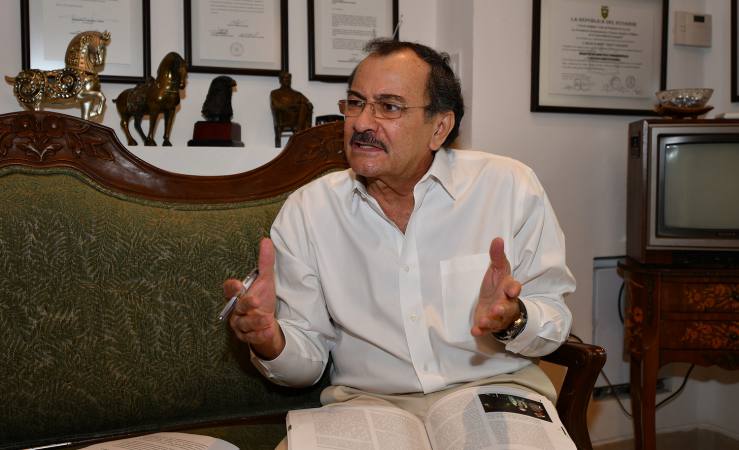 A former senior Ecuadorean official who was convicted in his home country of extorting millions from Brazilian engineering firm Odebrecht S.A. was arrested in Miami on Monday in a related federal money-laundering case. Carlos Polit Faggioni, who lives in a condo high-rise along the Miami River, was Ecuador’s longtime comptroller. Polit’s position, which was created to combat the fraudulent use of government funds, required him to sign off on public budgets that authorities say enabled him to demand $8 million in bribery payments from Odebrecht.

The giant engineering firm is at the center of public corruption scandals extending from South America to the United States. Polit, 72, was charged in a money-laundering conspiracy indictment during his first appearance in Miami federal court on Tuesday.

Polit is being held at the Federal Detention Center and has a pretrial bond hearing on Friday. Prosecutors Michael Berger and Alexander Kramer said they would seek to detain Polit behind bars before his trial, but indicated they might be open to a possible bond allowing his release.

His defense attorney, Fernando Tamayo, told Magistrate Judge Jacqueline Becerra that “we’re working on a bond package that is acceptable to the government.” Polit’s arraignment is pending. He also faces an extradition request by Ecuador, where he was tried and convicted in absentia because he had left for Miami before the 2018 trial in his native country.

According to the indictment, Polit is accused of conspiring with a relative, an Odebrecht executive and an Ecuadorean businessman in transferring ill-gotten bribery payments from the engineering firm through a series of shell companies and bank accounts in South Florida between 2010 and 2017.

The indictment says Polit “solicited and received bribe payments” from the Odebrecht senior manager “in exchange for using his official position and influence as comptroller of Ecuador to prevent the imposition of large fines on Odebrecht by the comptroller’s office relating to Odebrecht’s construction projects in Ecuador.”

Polit was paid $8 million by the unidentified executive “to influence official actions by the Ecuador comptroller’s office in order to benefit Odebrecht and its business in Ecuador,” according to the indictment. Polit told the Odebrecht executive that he used another co-conspirator, an unnamed relative, “to make the cash ‘disappear,’ ” the indictment says.

The case, probed by Homeland Security Investigations, is built upon an electronic trail of financial records and cooperating witnesses. Three years ago, McClatchy-Miami Herald and other news media collaborated on an investigative project that zeroed in on Odebrecht’s parallel off-books accounting system.

Leaked documents showed links between Polit’s Miami-based son, John Christopher Polit, and a U.S. shell company, Ventures Overseas LLC, which became a pass-through for the alleged bribery payments by Odebrecht. John Polit, a former securities broker in Miami, was also convicted in Ecuador of being an accomplice in connection with his father’s case. But his conviction in Ecuador was overturned in 2020, and he has not been charged in his father’s federal case in Miami.

The Polits were the focus of a McClatchy-Miami Herald investigation in 2019 that showed the son had taken on mortgages on several pricey properties in the Miami area, including a luxurious home in Cocoplum, that had earlier been purchased outright. Venture Overseas was at the end of a chain of financial transfers between anonymous shell companies that began with one controlled by Odebrecht S.A. called Kleinfeld Services.

Company officials have admitted Kleinfeld was one of several used in an off-books accounting system called Drousys that was used to pay bribes in exchange for public works contracts.. The Polits were convicted in Ecuador in 2018 on extortion charges that involved receiving bribe money from Kleinfeld. They insisted they were the targets of political persecution.